My wife Madeleine and I had a wild Memorial-day weekend.

Late Saturday afternoon, a dog found a baby squirrel, perhaps 5 or 6 weeks old, and chased it through our fence. The poor squirrel appeared to be in shock—its back was wet; it had probably been mouthed by the dog—but otherwise unharmed. We tried putting the baby squirrel on a protected tree branch in hopes that its mother would come and rescue it, but that did not happen and it did not budge … and nighttime was approaching.

So we brought the squirrel inside, and placed him in a secure container with rags to keep warm overnight. We hoped he would survive.

Indeed, the next morning, little “Nutcase” was dry and warm and, while still scared, on close inspection he seemed healthy and acting much stronger. You can see me holding him in the picture below.

On Sunday, we found a local wildlife rescue shelter that already had 20 other baby squirrels. There’s evidently been a bumper crop of the little fellas this year. Rearing them with others of their species, and with appropriate food and shelter, gives the foundlings a better chance of surviving when they are released back into the wild. Good luck, little Nutcase!

That wasn’t the end, though, of our wild weekend. On Monday, as Madeleine helped our daughter clean a garden shed, they disturbed a mother deer mouse living in a lawn-care bag with seven nursing pups.

The bag had been moved outside the shed before the mice were discovered. Mama mouse ran and, along with one of the pups, she hid right next to the bag inside a dense roll of wire fencing, the type used to protect young trees from browsing deer. But mama mouse did not abandon her pups!

Success! Mama mouse was reunited with all her babies, and she promptly set out to nurse them. We gave her some bits of fruit and nuts, and a jar lid with water, to help her get over her stress and back to her work raising her family.

It’s amazing how invested one gets in helping wildlife survive, especially after meeting them “in person.” 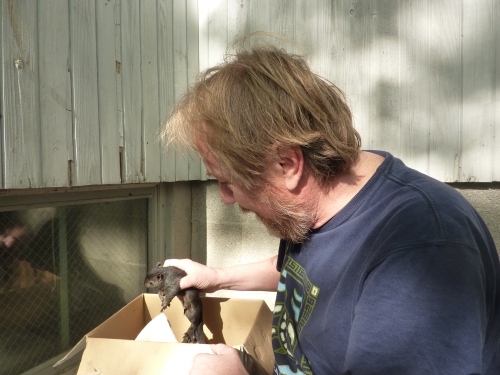 Comments Off on A Wild Weekend