What We’ve Learned about Evolution from the LTEE: Number 4

This is the fourth in a series of posts where I summarize what I see as the most important findings and discoveries from the LTEE.  The previous entries are listed here:

Number 1.  The LTEE offers a simple, compelling demonstration of adaptation by natural selection.

Number 2.  Although the rate of improvement decelerates, it appears that fitness can increase indefinitely even in a constant environment.

Number 3.  The LTEE has produced many striking examples of both parallel and divergent evolution across the replicate populations.

Number 4.  The LTEE provides fascinating cases of the origin and subsequent evolution of both a novel function (citrate utilization) and complex ecologies (cross-feeding interactions).

These examples are particularly interesting—and surprising—because I chose the environment of the LTEE to be as simple as possible, thereby limiting the opportunity for novel functions and complex ecologies to emerge.  However, the evolving bacteria have proven me wrong by discovering new ways of making a living in the simple flask worlds where they live.

This photo shows the increased turbidity (cell density) of the population that evolved the ability to use citrate in the middle, along with two others from the LTEE.  Brian Baer and Neerja Hajela took this picture in my lab in 2008. 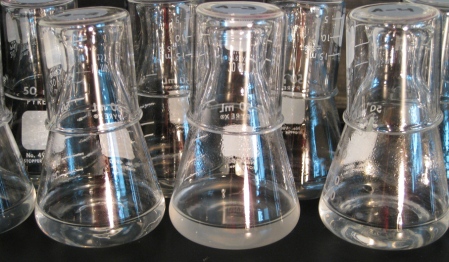 2 responses to “What We’ve Learned about Evolution from the LTEE: Number 4”